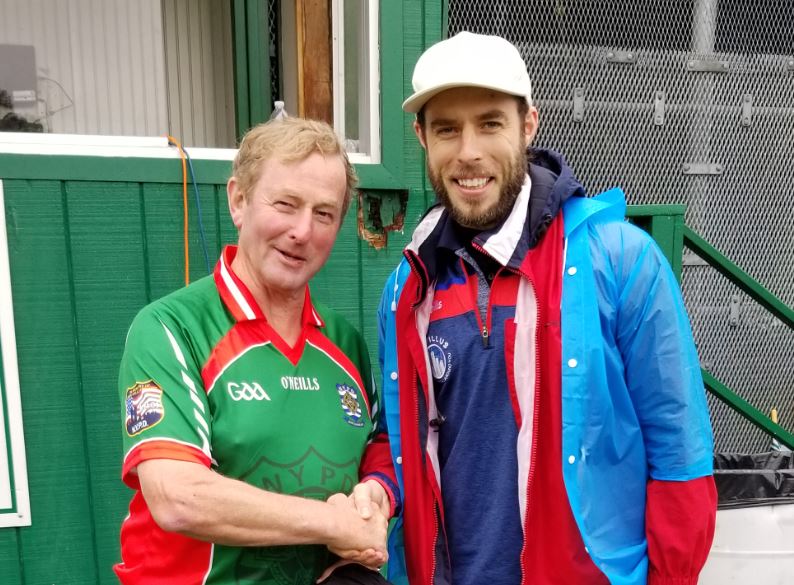 Sometimes it’s not the winning but taking part that counts, and that certainly was the message from former Taoiseach (Irish Prime Minister) Enda Kenny following Mayo’s rout of New York at Gaelic Park in the Bronx last Sunday in the opening game of the Connacht Championship

Mayo native Enda Kenny, who sported a green and red NYPD jersey presented to him the night before the game told the Irish Voice, “While the game itself wasn’t any great spectacle, there was a gulf in standard, it’s still important that teams from Ireland come to New York and play the games here, not just in New York but across America.

“They are actually a central part of who we are and what we are as a people, given the fact that emigration was always a part of the Irish DNA, the spread of Gaelic games and the retention of our culture and what it means is very important for the community.  Gaelic games give young people a sense of place, a sense of understanding and that’s part of our character.

“The spread in the last 20 years to the Middle East and to Australia and the Asian countries, it’s all indicative of the confidence young people have as Irish people and now can stand on any stage around the world and hold their own with their peers and from that point of view, playing your native game, and keeping contact alive with your home country is very important.”

The former Fine Gael leader revealed that he too played at the famed Gaelic Park.

“I was here in 1974 and played on this pitch, the precursor to this pitch, with a Longford team of which the great Jackie Devine was a member. In those days this pitch was as hard as a rock,” Kenny recalled.

“There was what they call ‘a line of action’ down the middle which was a line of dust, and obviously the games began here at 11 o’clock on a Sunday morning and by the time you got to seven o’clock in the evening some people were in a desperate state.”

Sometimes it’s not the winning but taking part that counts.
That was the message from former Taoiseach #EndaKenny when I spoke to him following @MayoGAA’s defeat of @NewYorkGAA last Sunday.#newyork #GAA @officialgaa. #community#ThrowbackThursday #Throwback #thoughts pic.twitter.com/Z9EztiVmU2

Speaking on plans for a new Gaelic Park clubhouse which will begin construction in the coming weeks Kenny said, “I’m very proud of that, and just to see that the Kerry O’Donnell buildings were actually demolished last week, so it’s great that permission has been given and so that they can actually start the construction now.  That will add to the satisfaction and the rating and the attraction of Gaelic Park and GAA headquarters here in America to continue to build the games for the future.

“I’m happy to see all the little youngsters out on the pitch at halftime doing their thing.  This for them can be their field of dreams.”

This article first appeared in IrishCentral.com and the Irish Voice on May 8, 2019. To view the original version, click here.