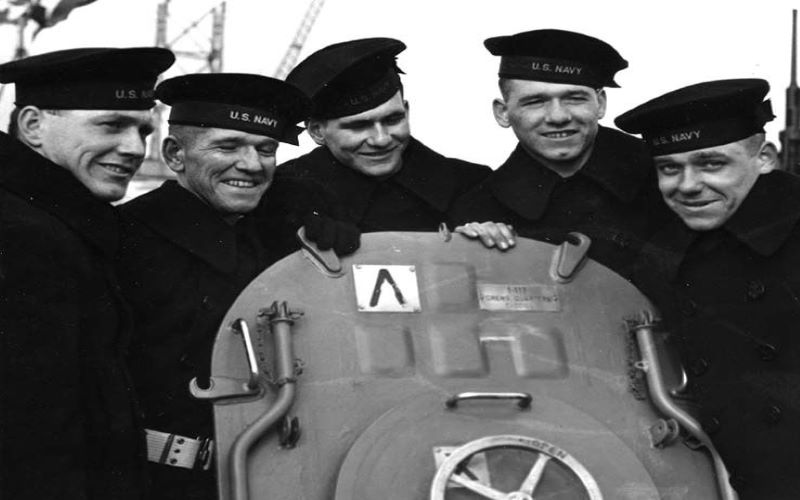 Who were the Sullivan brothers?

Five Irish American brothers the Sullivans made the ultimate sacrifice when they were killed aboard the USS Juneau during World War II, here are some of the top facts about these brave men.

The USS Juneau sunk on November 13, 1942, a year after being commissioned, killing 687 men on board including the five Sullivan brothers.

According to the Navy Times,  interviews conducted soon after the disaster
and in the years that followed revealed the five Sullivan brothers and their sister Genevieve, or Gen, grew up with little parental guidance in Waterloo, Iowa.

Locals repeatedly told investigators that their father, Tom, was a physically abusive alcoholic who went on benders on his off days from work as a freight conductor on the Illinois Central railroad.

Their mother, Alleta, was often “blue” and, when she had her “spells,” would take to bed for days at a stretch.

The Sullivan brothers all left school around the age of 16

All five boys left school at age 16 or so, barely completing junior high, and were often out of work—in part a result of the Great Depression.

Without jobs, they snitched their dad’s moonshine and shadowed him to the downtown backstreets to pick up drink.

News of their friend William Ball’s death aboard the USS Arizona at Pearl Harbor prompted them to enlist in the Navy.

The brothers immediately decided to join the navy—even the youngest, Al, who had married at 17 and had a 21-month-old son, Jimmy.

George and Francis Sullivan had only been discharged from the Navy less than a year before, having served together on the USS Hovey.

“We had 5 buddies killed in Hawaii. Help us,” George wrote.

The tragic sinking of the USS Juneau was compounded by the fact that five brothers perished which was a rare occurrence because naval policy did not encourage family members to serve together.

Yet, George, Frank, Joseph, Matt, and Albert refused to serve unless assigned to the same ship, so the policy was not enforced.

George wrote a letter to the Secretary of the Navy, citing his own and Francis’ recent service and asking if he, his brothers and two friends from their motorcycle club could “stick together.” He closed with the phrase, “We will make a team together that can’t be beaten.” The Secretary of the Navy granted the request.

On February 14, 1942, the day the brothers’ assigned ship, the Juneau, was commissioned and a photographer took a shot of the five smiling Sullivans aboard the vessel.

The publicity photo would later become a familiar emblem of American sacrifice.

In November of 1942, the US and Japanese forces were locked in the deadly struggle for Guadalcanal in the South Pacific. Shortly after midnight on November 13, one of the most dramatic naval engagements of the war occurred in the strait between Guadalcanal
and Florida Island. American and Japanese naval task forces engaged each other at point-blank range.

The Juneau was an early casualty, hit by a torpedo from Japanese destroyer Amatsukaze which ripped into her port side taking out its steering and guns and killing 19 men in the forward engine room. Her fire control systems destroyed and power
knocked out, she limped away from the battle but was able to rejoin the  group of five surviving warships from the task force.

At 11:01 am a Japanese submarine tracking the vessels fired another torpedo into the Juneau and blew the ship in half.

Francis, Joseph, and Madison were killed in the initial attack and Albert drowned during the second attack. George was one of 80 men who made it to life rafts but allegedly died from a shark attack.

Two survivors remembered the death of the eldest Sullivan, George, in particular. He had been aboard one of the small life rafts and, after three or four days, was weak and hallucinating.

One night, Gunner’s Mate Second Class Allen Heyn recalled, George declared that he was going to take a bath. He removed his uniform and jumped into the water. A little way from his raft, “a shark came and grabbed him and that was the end of him,” Heyn told a naval interrogator. “I never seen him again.”

Because of the risk of further enemy action, the remaining US ships did not search for survivors as the commander of the task force believed that no one could have survived the blast.

Within a half-hour of the sinking, however, an American B-17 flying overhead spotted 100 to 200 sailors in the sea—many of them badly injured—clinging to debris from the cruiser.

The B-17 radioed the commander of the flotilla, Captain Gilbert Hoover of the light cruiser Helena, who continued onward.

The aircraft circled again to drop supplies, yet for several days the navy did nothing to assist the sailors. As time went by, their numbers thinned as the remnants of Juneau’s crew succumbed to their injuries, dehydration, or shark attack.

When South Pacific Area commander Admiral William F Halsey learned what had happened, he immediately stripped Captain Hoover of his command. By the time the survivors were collected—a week after the sinking, only 10 men remained.

Ages of all five Sullivan brothers at the time of death

There was a seven-year gap between George, 27, the eldest brother and Albert or “Al,” who was the youngest at 20.

At the behest of the navy, President Franklin D. Roosevelt wrote Alleta a personal letter of condolence.

“As Commander in Chief of the Army and the Navy, I want you to know the entire nation shares your sorrow. I offer you the condolence and gratitude of our country. We, who remain to carry on the fight, must maintain the spirit in the knowledge that such
sacrifice is not in vain.”

Naval authorities encouraged the parents to come to Washington, where First Lady Eleanor Roosevelt and Vice President Henry A Wallace met with the parents.

Pope Pius XII sent a silver religious medal and rosary with his message of regret and the Iowa Senate and House adopted a formal resolution of tribute to the Sullivan brothers.

The Sullivan brothers had a feature Hollywood film made about them

The navy persuaded Tom and Alleta Sullivan to sign a contract that eventually had 20th Century Fox produce The Sullivans—quickly re-released as The Fighting Sullivans in 1944.

The movie paid tribute to “an American family and their devotion and loyalty,” portraying Tom and Alleta as honest and hard-working parents, raising their children in a typical American community and showing the growing fraternal bond amongst
the five brothers.

The Sullivan brothers have two US navy ships named after them

USS The Sullivans (DD-537) was named in honor of the five Sullivan brothers and first launched on April 4, 1943. It is a Fletcher-class destroyer and was assigned to the 6th Fleet during World War II and the Korean War receiving nine and two battle stars respectively. Albert’s son James later served aboard the ship named after his father and uncles.

She was decommissioned in 1965, and in 1977 was processed for donation to the Buffalo and Erie County Naval and Military Park in Buffalo, New York. The ship now serves as a memorial alongside USS Little Rock and is open for public tours.

USS The Sullivans was also the first ship commissioned in the Navy that honored more than one person.

USS The Sullivans (DDG-68) is an Arleigh Burke-class Aegis guided-missile destroyer and the second ship of the United States Navy to be named after the five Sullivan brothers.

The ship was launched on August 12, 1995, and sponsored by Kelly Ann Sullivan Loughren, granddaughter of Albert Sullivan. She was commissioned on April 19, 1997, and along with her predecessor, was given the motto that is thought to have been spoken by the brothers when asked to separate during World War II, “We
Stick Together.”

In 2000 a group affiliated with Al-Qaeda attempted to attack the vessel while in port at Aden, Yemen but the attackers’ boat sank before the attack could be carried out.

The plan was to load a boat full of explosives and explode near The Sullivans however the boat was so overladen that it sank, forcing the attack to be abandoned.

Wreckage of the USS Juneau was discovered on St. Patricks Day 2018

On March 17, 2018 (St Patricks Day), a research team made the incredible discovery of the WWII US Navy ship USS Juneau on which the five brave Sullivan brothers died in 1942.

Microsoft co-founder and philanthropist Paul G. Allen led the expedition which discovered the famous ship on the floor of the South Pacific Ocean.

WWII ship USS Juneau located by #RVPetrel on St. Patrick’s Day—unexpected coincidence since she is best known for the Sullivans, all 5 brothers were lost, along with
the other 682 sailors. Only 10 survived the sinking by Japanese torpedoes. https://t.co/FOkRwR6FXc pic.twitter.com/1PZjNP1uHd

The words and devotion to country and family of the Sullivans are well worth remembering by all Americans.

This article first appeared in IrishCentral.com on September 9, 2019. To view the original version, click here.