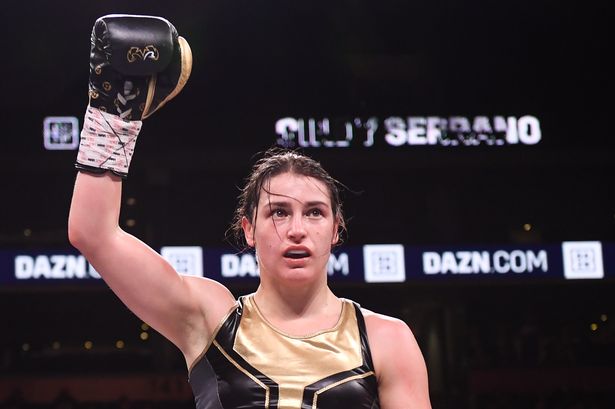 As Katie Taylor exited the Madison Square Garden arena last December, a swarm of children raced across the first-floor seats toward her.

Screaming her name, in vain they reached down to touch the Olympic gold medalist who had just impressively defended her world titles.

What was striking about that moment were the headbands wrapped around their heads which read “Canelo”.

These young kids of Mexican descent were there to watch Canelo Alvarez, the highest paid sportsperson in the world.

Yet they knew all about Brays Katie Taylor.

In a way, the last two years were served as an apprenticeship for the 32-year-old since turning professional.

But things are set to ramp up rapidly and her manager Brian Peters doesnt underplay the hopes and aspirations for 2019.

“This year she is going to turn into a global superstar,” manager Brian Peters says unequivocally.

“Have no doubt it she’s going to go down as the greatest Irish athlete of all time”.

In Philadelphia on March 15th Taylor resumes her campaign to unify the lightweight division when she looks to add Rose Volante’s WBO strap to her WBA and IBF belts.

Should she triumph all roads to unification would culminate on the Anthony Joshua v Jarrell Miller undercard in the Garden on June 1st against WBC “queen”, Delfine Persoon [42-1, 17KOs].  In the era of four major titles per weight division, no Irish fighter has held more than two simultaneously. If she were to overcome Volante, Taylor would become the first ever.

Such is the significance of that bout that “Ring Magazine” will award winner the commemorative “ring belt” to mark the occasion.

”That puts her in a standing with the likes of {Oleksandr} Usyk, the undisputed cruiserweight champion, {Vasyl} Lomechenko, Terence Crawford, Errol Spencer,” according to Peters.

But the path to boxing eminency wouldn’t end there.

Focus would then quickly shift to the much-anticipated clash with Puerto Rican born Amanda Serrano {35-1, 26 KOs], a world champion in seven different weight divisions. A clash so grandiose, it would likely headline a DAZN card by itself in New York.

Nevertheless, before year ends, all the stars may align to eclipse even that showdown as boxing’s “First Lady”, Cecelia Braekhus [35-0, 9KOs) looms over the horizon.

The first of the modern era in fact – male or female.

“A fight like Braekhus will have to get the stage and platform it deserves, those fights don’t come around very often. That would be on a Joshua against Wilder or Fury ticket but we’ve three big fights to get over before we get to that.”

Such is the nature of the boxing beast, Peters has to plan and navigate many fights in advance yet it only heaps further pressure on the Connecticut based Taylor.

“There’s so many things that can go wrong especially in the pro game which is different, but thankfully Katie most of the time has answered the call.”

Witnessing Taylor dazzle live is incomparable to viewing her from a TV set yet Peters is adamant where the future lies.

Unfortunately I don’t believe Katie will be boxing in Ireland either, says Peters.

“But we’re very lucky to have these great opportunities in the US with Eddie Hearn (promoter), DAZN, and Sky Sports.

“She’s going to get eight or 10 times the money she would have gotten 12 months ago so you have to build on these things – Katie has transformed women’s boxing”.

“If people get an opportunity they need to go to a Katy Taylor fight at least once just to experience it”.

“They’ve given Katie a serious platform to become a major star in world boxing and each and every time she’s delivering and stepping up to the plate which is fantastic because it’s hard for fighters to keep producing”.

“She’s doing it to set a legacy which, I believe, in a 100 years’ time people will still be talking about Katie Taylor”.

This article first appeared in the Irish Examiner on March 2nd, 2019. To view the original version, see below.