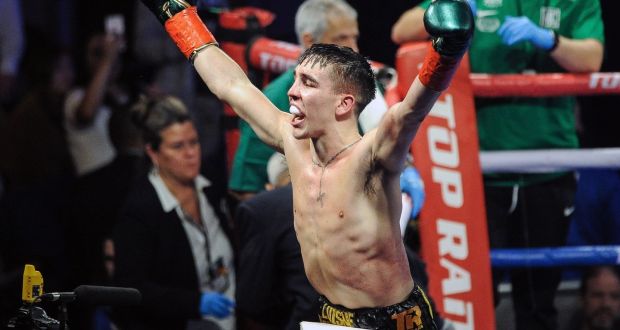 The Belfast man went the full distance with all three judges scoring the 10 rounder 100-90 in favour of the 27-year-old.

The featherweight and two-time Irish Olympian is now unbeaten in 11 professional bouts as he steadily makes his way up the ranks towards world title clashes.

It was the third year in a row Conlon has headlined a Top Rank promoted St Patrick’s weekend event at the New York venue and although the contest didn’t match the raucous pre-fight party atmosphere, the outcome was never in doubt.

Conlon has acquired quite a following stateside and with WWE superstar Finn Balor proudly waving the Irish tricolour in behind, he approached the ring to a boisterous crowd singing along to the Wolfe Tones’ “Celtic Symphony”.

“I think I just used my skills as I said I would. I think I showed a lot of good defensive movements and things I’ve been working on,” Conlon said afterwards.

“We were in no rush to try and take out this guy. He’s tough. He went the distance with [Nonito] Donaire and a few other top fighters. He had a tough head on him. There were a few times I probably could’ve stepped on it, but we wanted to practice things we’ve been working on. I felt I did that tonight.”

The opening round was very much a stand-offish affair but Conlon tried to assert in the second, with his probing right jabs helping him set up some dangerous left hooks.

Conlon was firing off some tidy three-punch combos in the third, smartly ducking away from any Hernandez counters.

In round four Conlon blew Hernandez to the ropes with a powerful left hook but he emerged unscathed yet was failing to have any meaningful impact on the tie.

That changed in round five as he caught Conlon with a solid left jab to the face.

Hernandez did get Conlan on the ropes with some combinations and neat uppercuts in round six, but Conlon withstood the onslaught and reasserted his dominance – rallying with some left hooks to the face and chest.

The mood in the arena was more sombre by the seventh as Conlon went about his business industriously.

By now Conlon was landing plenty of shots to the body but Hernandez to his credit was able to endure. He did rally but it was all in vain – Conlon much too quick on his feet, ducking away from some wild swings.

The crowd were back on their feet as the finishing line came into view. Conlon returned a hard shot to the face with a clean right jab up some left hooks to the body and face in round eight.

The two fighters touched gloves to begin round 10 and although it got a bit messy, Conlon powered to the final bell with consummate ease.

As for what’s next?

“Vladamir I know you’re here, I Know you’re here tonight, we need to do it again we need to have that rematch”, a fired up Conlon declared afterward. He was of course referring to Russia’s Vladimir Nikitin, the man who infamously dumped him out of the 2016 Olympics.

“I need to right a wrong. We’ve got to do it again, we’ve got to get that rematch”

Elsewhere, fellow MTK Global team-mate Paddy Barnes lost out by a split decision against Dallas native Oscar Mojica in a six-round contest at bantamweight – a loss which likely ends the career of two-time Olympic bronze medallist.

Barnes had moved up two weights from flyweight to bantamweight but was still expected to defeat the Texan on his US debut.

“I think the first right hand he hit it broke my nose, I could hardly see out of my left eye”

“I will probably retire now because I don’t know there’s no real point in boxing at all after a defeat like that.”

This article first appeared in the Irish Times on March 18th, 2019. To view the original version, click here.