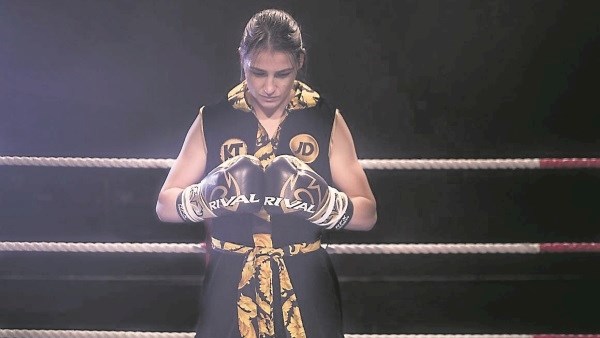 Katie Taylor bids to take another major step in becoming the undisputed lightweight champion of the world when she faces WBO champion Rose Volante in Philadelphia on Friday night.

“Rose Volante from Brazil has become a huge star, she’s 14 – 0. She’s been flawless as a professional, she is extremely strong, she punches very very hard and is by far the toughest test of Katie Taylor’s career so far,” said promoter Eddie Hearn at yesterday’s press conference.

“There’s such a rich history of boxing here in this city, I’m so excited to be boxing here at the weekend,” said the 32-year-old Taylor.

“I’ve had a great training camp over these last few months and I’m just ready to fight at this stage.

The 2012 Olympic gold medallist is relishing her 13th professional fight but is cognisant of Volantes physical threat.

I know the danger that Rose Volante brings to the table: she’s a very strong fighter, she’s an undefeated fighter, she has a big right hand and all of her other opponents can testify to that.

“It’s a huge chance for me, a chance to unify the division once again and a chance to take that step closer to becoming undisputed champion.”

“I’m looking forward to a great challenge. I’m sure she’s ready for the challenge as well. You’re going to see the best of women’s boxing on Friday night.”

Speaking through her translator Volante said she too would “like to complete the dream of unifying all the titles,” in what she describes as the biggest fight of her career.

“Friday night you will see who will be the best lightweight in the division”.

Joining Taylor and Carroll on Matchroom USA’s Philadelphia bill will be 2012 Olympic silver medallist John Joe Nevin who too remains unbeaten in the professional ranks.

This article first appeared in the Irish Examiner on March 14th, 2019. To view the original version, click here.