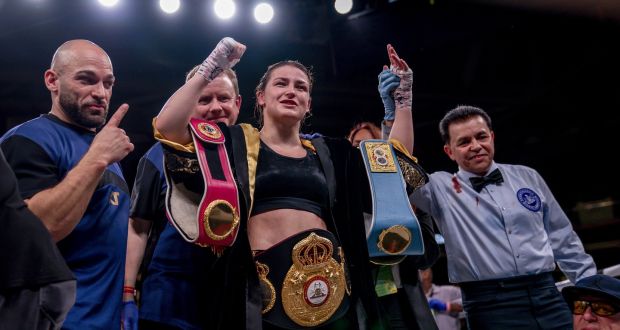 A June 1st clash with WBC champion Delfine Persoon now remains Katie Taylor’s final stumbling block to becoming the undisputed lightweight champion of the world after she overcame Rose Volante in a bruising encounter in Philadelphia on Friday night.

The 2012 Olympic gold medallist stopped the Brazilian’s gallant effort in the ninth round in what was another wonderful advertisement for women’s boxing.

With the WBA and IBF belts already in her possession Taylor relieved Volante of her WBO strap and in doing so becomes the first Irish fighter to hold three world titles at the same time in the four-belt era.

“I knew all along she was going to come to fight,” said a visibly bruised Taylor afterward.

“She’s a very, very proud champion, an undefeated champion, so she was everything I expected tonight. She came to fight, and that got the best out of me as well.”

Dressed in her customary all-black apparel, with “Katie” emblazoned in glittering gold across her waistline, Taylor lit up the large St Patrick’s crowd in what was arguably the best performance of her professional career. Taylor’s onslaught of quick combination punches and strategically placed body shots were enough to withstand Volante’s aggressive approach and heavy right hands.

In truth, Volante never looked like landing a significant blow, a slight slip by Taylor at the end of round two the only cause for concern.

“The Queen” Volante came to the Liacouras Centre with her own dreams of unification, but admirably relinquished her crown to the electrifying Bray woman.

Volante went on the offence early doors, immediately backing Taylor into a corner but the 32-year-old was unfazed and quickly began measuring her opponent – a strong right hook knocking the Sao Paul native to the floor.

Volante made it to her feet after a seven-count but appeared unscathed and quickly re-engaged Taylor with some strong right arms.

Another hard right by Taylor was returned at the beginning of round two but the muscular Volante met the bell with a cut appearing from her right cheek.

Taylor appeared in control of the contest by round four, landing some exciting combination blows but still the Brazilian came forward full of energy and gusto as the two champions locked horns.

By round five Taylor began adding some impressive body shots to her repertoire which began penetrating Volante’s defence – Taylor’s quick feet always too speedy for the 36-year-old to inflict significant damage of her own.

Taylor was in control by rounds six and seven as the raucous crowd broke out into chants of “olé, olé,” but she upped the ante dramatically in round eight as Volante tired.

In the end it was an accidental clash of heads that undid the Volante challenge, a nasty gash appearing on the bridge of her nose after she reached in to catch Taylor at the end of round nine.

Volante leaned on to the chest of referee Benjy Estevez to wipe her wound but the official abruptly called a halt to proceedings after witnessing his blood-stained shirt, much to the surprise of the crowd.

“It was a funny kind of stoppage, she just kind of turned her back and walked back to the corner,” remarked an elated Taylor.

“Then, the ref just waved it off. I was obviously delighted. I was like, ‘Thank God! I can relax now’.”

“I knew she was on her way out. Sometimes it is very, very hard to stop these opponents at this level. It was a very, very tough fight. She took a lot of punishment.

“It was the icing on the cake to actually get the stoppage. I knew she was going to put pressure on me right from the start, but I think a lot of these girls underestimate my own strength up close. I can mix it with anyone in there. I love fighting up close. And she definitely couldn’t handle the body shots when I started going down there, and that’s what got her out in the end.”

Taylor will now return to Madison Square Garden in a bid to realise her dream of unifying the division on the Anthony Joshua v Jarrell Miller card.

“That’s always been my goal since I have turned pro. That would be absolutely historic. That would be equal to winning the Olympic gold medal for me,” said Taylor.

That deal is set to be announced within the next fortnight but Taylor’s star is shining so brightly stateside that she may headline her own New York City card in the autumn. Puerto Rican-born Amanda Serrano, a world champion in seven different weight divisions, the likely opponent.

All going well the year could close out with Taylor facing undisputed welterweight champion Cecelia Braekhus in what would be the first clash between two undisputed champions in modern times, male or female.

This article first appeared in the Irish Times on March 18th, 2019. To view the original version, click here.