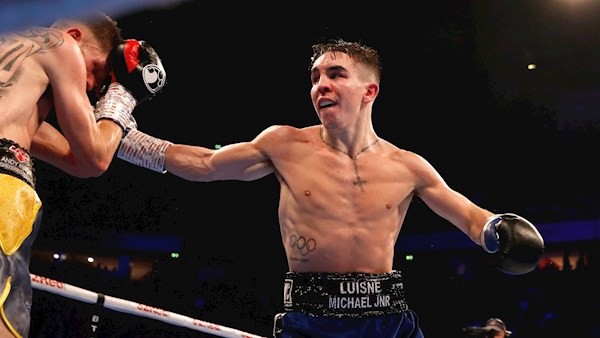 By Michael Dorgan in Philadelphia

It will be the third year in a row the Belfast-born fighter will headline a Top Rank promoted St Patrick’s weekend at Madison Square Garden’s Hulu Theatre.

The 27-year-old featherweight and two-time Irish Olympian is unbeaten in 10 professional bouts and is making his way up the ranks to world title clashes.

Conlan switched codes after being dumped out of the 2016 Rio Olympics at the quarter final stage in a decision roundly condemned by boxing experts. His opponent on that occasion, Russia’s Vladimer Nikitin, will also feature on tomorrow night’s card and their paths could cross again this summer for the first time in the professional ranks.

The 2012 Olympic bronze medallist was last seen in action back in December when he outclassed Jason Cunningham to claim the WBO Inter-Continental featherweight title at Manchester Arena.

In what is quickly becoming an annual Irish pilgrimage, the 5,000-plus seater arena is set to be awash with green as Conlan returns to the scene of his memorable 2017 professional debut where he was accompanied to the ring by MMA star Conor McGregor.

Conlan is long odds on to defeat his 25-year-old opponent as is MTK Global team-mate and fellow 2012 Olympic bronze medalist Paddy Barnes who makes his US debut against Dallas native Oscar Mojica in a six-round contest at bantamweight.

It will be 31-year-old Barnes’ first appearance since suffering a stoppage defeat to Cristofer Rosales in a maiden world-title fight at Windsor Park last August.

O’Sullivan will be the toughest opponent Gray has faced with the Mahon man expected to win easily.

O’ Sullivan has moved down from middleweight and a win would put him in line to face the winner of April’s WBO light middleweight championship bout between Mexico’s Jaime Munguia and Kildare’s Dennis Hogan. Gray moves back up to 154 pounds to where he competed earlier in his career while O’Sullivan drops down from 160.

Leeside will be doubly represented as Macroom’s Noely Murphy takes on Lucan’s John Joyce in an eight-round welterweight clash which is expected to be a tightly fought affair. Army Corporal Joyce is another Irish fighter making his competitive debut Stateside while Murphy, who is based in New York, has fought 12 of his 14 fights here.

Murphy narrowly lost his unbeaten streak in February 2018 to Brooklyn southpaw Mikkel Lespierre, who went on to land a WBO world title shot last weekend. But Murphy steadied the ship to come away with an admirable draw against Andre Byrd last December.

This article first appeared in the Irish Examiner on March 16th, 2019. To view the original version, click here.