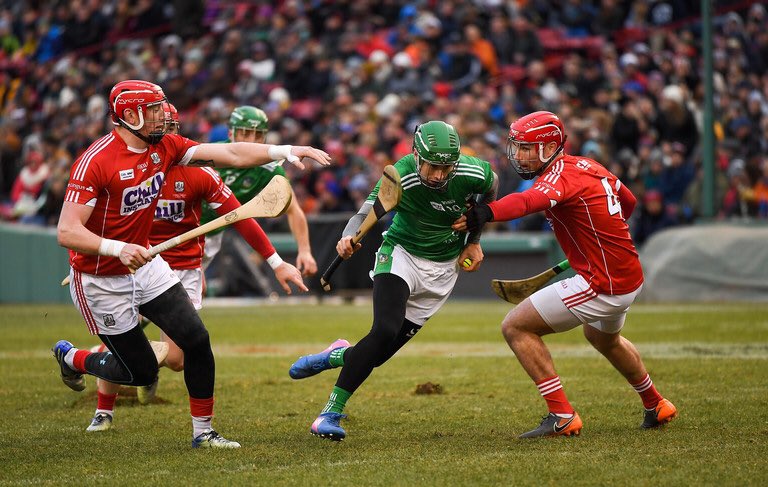 Just as they finished their semi-final win over Wexford, Limerick started the final in dominant fashion, an opening eight-minute deluge seeing them notch up a 21-0 lead over the Rebels.

A last minute penalty goal against Clare from All-Star forward Patrick Horgan had sealed Cork’s place in the ‘Super 11’s’ final and perhaps the long wait around was to blame for the lacklustre start by John Meyler’s men in this modified rules match, where only goals counted.

Tomás Morrissey opened the scoring for Limerick with a neat three-pointer in the first minute which was quickly followed by a penalty corner from Barry Murphy. Murphy doubled his tally three minutes later and Morrissey chipped in again with another close-range goal as Limerick continued to pound the Cork defence.

Hurler of the Year, Cian Lynch, then showed the near 13,000 Bostonians in attendance why he was recently voted Ireland’s top player with an outstanding long-range goal finished to the top right-hand corner of Anthony Nash’s net.

The score would have been a lot worse had it not been for the Kanturk net minders heroics, Nash undoubtedly Cork’s best player over the two games coming to their rescue time and time again with spectacular saves.

The Limerick onslaught was finally abated when Horgan got the Cork scoreboard ticking after 10 minutes with a five-point penalty corner. After striking Nicky Quaid’s post the Glen man added a rebounded three-pointer soon after and Cork ended the half with a bit of momentum as a blistering long-range Shane Kingston goal had the scoreboard reading 24-13 in Limericks favour.

Tom Morrissey and Bill Cooper exchanged three-pointers after the restart and when Horgan cut the deficit to eight points with a brilliantly batted goal Cork looked to be back in touch.

However, another long-distance strike from Lynch was followed by an Andrew La Touche Cosgrave five-pointer to all but end the contest as the Treaty County led 35-19 with 10 minutes remaining.

Conor Lehane and Cooper rallied for Cork reducing the margin to 10 points but a few wayward passes and with McQuaid also in top form, Barry Murphy hit back for Limerick to seal the win and add the Players’ Champions Cup to Liam MacCarthy in the Shannonsiders trophy cabinet.

This article first appeared in the Evening Echo on October 22, 2018. To see the original version, click here.