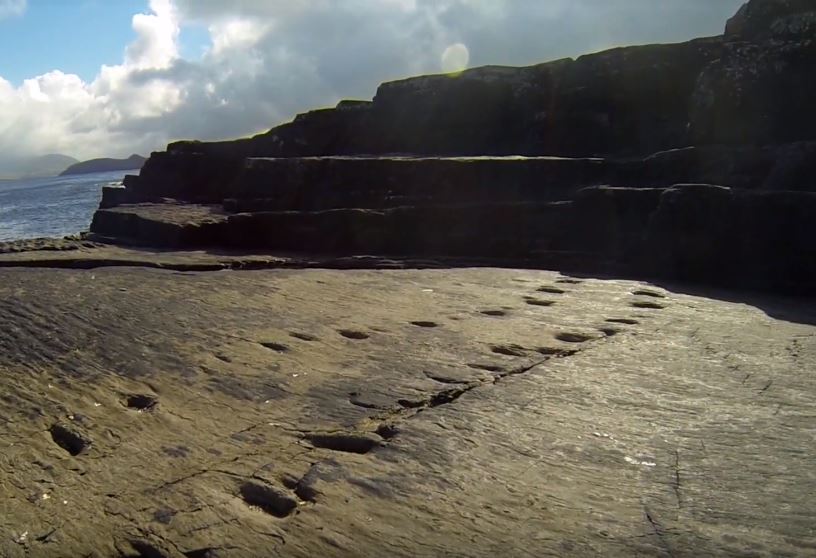 Off the southwest, Co Kerry coast lies one of Ireland’s most westerly points and best kept secrets, Valentia Island.

Almost 385 million years ago, long before dinosaurs set foot on earth, Ireland and Valentia Island lay south of the equator where the earliest land-going vertebrates known as “tetrapods” roamed.

Some of these creatures crawled along the muddy shore leaving not only their footprints but also faint impressions left by dragging their long tails – which accounted for almost half their length.

A 385 million year old fossilised trackway in Valentia, Co Kerry. The footprints were made by a primitive amphibian-like vertebrate called a tetrapod pic.twitter.com/UYPjyD2V6b

The rock later solidified, preserving its markings and over millions of years,  Ireland drifted north and the muddy shore ended up on the north side of Valentia Island, along Ireland’s Wild Atlantic Way.

The Valentia Island Tetrapod footprints are of international significance as it represents the transition of life from water to land – a momentous turning point in evolution and provides the oldest reliably dated evidence of four-legged vertebrates (amphibians) moving over land.

In 1993 an undergraduate geology student discovered the tetrapod’s track on the northeast of Valentia Island.

The footprints are of international importance as it provides some of the oldest evidence of one of the first water-dwelling creatures which crawled out of the water and made the important evolutionary step toward land dwelling.

Nine tetrapod trackways from three sites have now been reported from the Valentia Slate Formation of Valentia Island.

The formation is composed mostly of purple colored fine-grained sandstones and siltstones interpreted to represent a fluvial setting.

The most extensive of the Valentia Island trackways are preserved in a fine-grained sandstone and records some 145 imprints in a parallel orientation of the left and right impressions.

The systematic variation in size of the impressions affords distinction between tracks left by the manus and pes of the animal, but the trackway does not preserve any finer details.

Other trackways at the same site preserve tail and body drag impressions; the nature of the impressions and that of the sandstone led to the interpretation that the setting was not saturated in water. Consequently, these tracks are interpreted as evidence
of fully terrestrial locomotion.

The tetrapod imprints are thought to date from Devonian times – a roughly 60 million year period somewhere between 358 and 420 million years ago making these tetrapod trackways some of the earliest recorded.

The Valentia Island Tetrapod footprints are the most extensive of the four Devonian trackways in the world.

This is a hugely important National Heritage site and is protected by law.

This article first appeared in IrishCentral.com on June 7, 2019. To view the original version, click here.